The tree science and conservation society of South Africa

The Dendrological Society promotes the study, protection and propagation of trees and tree-dominated ecosystems as a contribution to effective environmental conservation and improvement in South Africa. Membership of the Dendrological Society is open to all natural persons whose application is seconded by two members and endorsed by the Executive Committee.

Arborum silvarumque conservatio salus mundi est
"The conservation of trees and forests is the salvation of the world"(Literally translated).

The original founder of the Society and Foundation was Dr Fried von Breitenbach who felt that the broad public should become more involved in the knowledge and conservation of our indigenous trees.

In 1979 when the Dendrological Foundation was founded, the terms "Dendrology" and "Dendrologist" were fairly unknown in South Africa. And yet there was a need for the creation of a competent body who would serve the particular requirements of a dendrological community in Southern Africa. The Foundation was formed as an independent, non-profit, non-racial association aiming at the promotion of the knowledge of trees, in particular the indigenous ones, their protection and planting and the preservation of tree-dominated ecosystems by way of research, publications, courses etc. 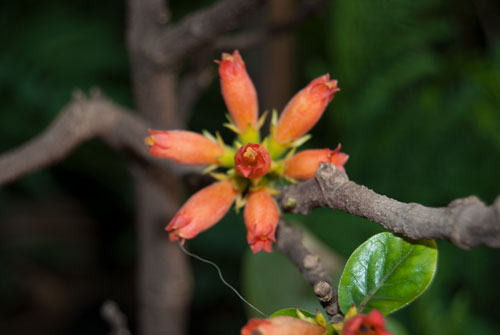 A project, which was of the highest priority, was the standardisation of the common English and Afrikaans tree names, a project started by the Botanical Research Institute in 1966 in the form of a list titled "66 Transvaal Trees". To every tree species a number was allocated as well. No matter how often the botanical names might change in the future, the numbers and common names would stay the same and so help to eliminate any confusion. Thereafter, the second step was to standardize the ethnic names, a task which took many years of intensive study in co-operation with various Universities. As the result of some very successful tree identification courses, the Dendrological Society was formed during 1980. The aims of the Society were to admit anybody as a member who was and is interested in acquiring a deeper knowledge of our indigenous trees. Trees provide food for birds and animals, shade and shelter, clean and moisten the air, are windbreakers and reduce the noise level, they prevent erosion and fertilise the soil. Tree conservation can't succeed without the active participation of everybody!

The Tree Number Plates were first issued in 1981 with white numbers on green fibreglass plates for the indigenous trees and black numbers on yellow background for the introduced trees. At a later stage, they were replaced by high-quality ABS-material with the national tree number, the botanical and the common names in Afrikaans and English. They are also available with and ethnic common name.

After the founding of the very first branch of the Dendrological Society, i.e. Pretoria, branches came into being all over the country, some highly active, some less so and some dormant. It was decided to name each branch after a tree species or a significant geographical feature. The society is still growing and will hopefully continue to do so in the future. 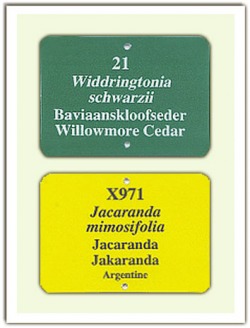 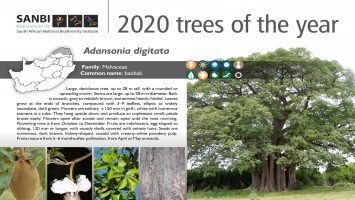 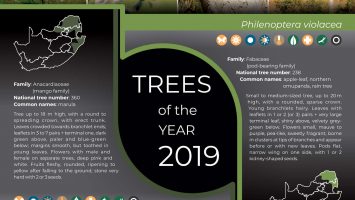